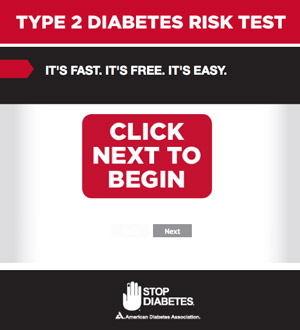 March 26 marks the 25th Annual American Diabetes Association Alert Day® and the Association is encouraging the public to take the Diabetes Risk Test to help determine whether they are at risk for developing type 2 diabetes. The risk test, which is available on Facebook, can be taken in less than a minute, and easily shared with family, friends and loved ones.

The Diabetes Risk Test requires users to answer simple questions about weight, age, family history and other potential risk factors for diabetes. Their results are reported as a numerical score indicating low or high risk for developing type 2 diabetes. Those at higher risk are encouraged to speak with their health care provider to learn more about ways to help reduce their risk or delay onset of the disease.

The latest diabetes statistics show that one in three American adults are at high risk for developing type 2 diabetes.  79 million American adults have prediabetes, which means that their blood glucose (sugar) is higher than normal, but not high enough to be classified as diabetes. What’s more, out of the nearly 26 million Americans with diabetes, one-fourth of them, or about 7 million, does not realize they have the disease.

Not only has diabetes reached epidemic proportions in the number of people affected by the disease in the U.S., but it has also shown an increased economic burden.  In March, the Association revealed the new 2012 Economic Costs of Diabetes in the U.S. study which shows that the estimated cost of diagnosed diabetes has risen to $245 billion, a 41 percent increase since the data was last collected in 2007.  This total cost includes $176 billion in direct medical costs and $69 billion indirect medical costs.

“The more people who take this first step in knowing their risk, the closer we will become to stopping this disease that has reached epidemic proportions,” stated Lurelean B. Gaines, RN, MSN, President, Health Care & Education, American Diabetes Association. “The time to act is now. Taking one quick minute to learn your risk today could lead to a much healthier tomorrow.”

Diabetes Awareness and Prevention
The primary risk factors for type 2 diabetes are being overweight, sedentary, over the age of 45 and having a family history of diabetes. African Americans, Hispanics/Latinos, Native Americans, Asian Americans and Pacific Islanders are at an increased risk, as are women who have had gestational diabetes or had babies weighing more than nine pounds at birth.

Diabetes symptoms can include frequent urination, blurred vision and excessive thirst. However, these overt warning signs may not become manifest for many years. As a result, for many, diagnosis may come seven to ten years after the actual onset of the disease. Closing the diagnosis gap is critical to successful treatment and delaying or preventing some of its complications such as heart disease, blindness kidney disease, stroke, amputation and death.

Studies have shown that type 2 diabetes can be prevented or delayed by losing just 7 percent of body weight (such as 15 pounds if you weigh 200) through regular physical activity (30 minutes a day, five days a week) and healthy eating.