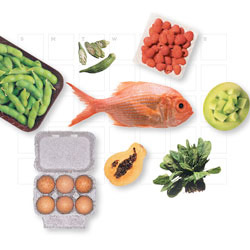 As a dietitian, my first job (a long time ago) was with the Visiting Nurse Association of Indianapolis.

One of my visits was with a slim, elderly gentleman, Jesse G., who lived in a one-room walk-up apartment. He had recently been released from a hospital after having been diagnosed with diabetes.

After talking for a few minutes, I asked if anyone had given him information about what to eat. He pulled out a dog-eared sheet of paper that included an exchange-type meal pattern and one sample day of meals. I asked him how he liked the meal pattern. “Fine,” he replied, “but I’m getting a little tired of eating the same foods every day.” Yes, he’d been eating the same exact foods and in the same amounts that were on that sample page every single day—what nutrition researchers call a constant diet!

Like Jesse, do you have a habit of eating mostly the same foods every day? If you think about what you eat during a week, do you find that you stick to the same few foods most of the time? The same juice or cereal or toast for breakfast, the same sandwich for lunch? While there’s no guideline about how many different foods a person should eat each day or week, a customary recommendation is to eat a wide variety. In fact, the latest U.S. dietary guidelines recommend:

Eating a variety of vegetables, especially dark-green, red, and orange vegetables and beans and peas.

Choosing a variety of protein foods, which include seafood, lean meat and poultry, eggs, beans and peas, soy products, and unsalted nuts and seeds.